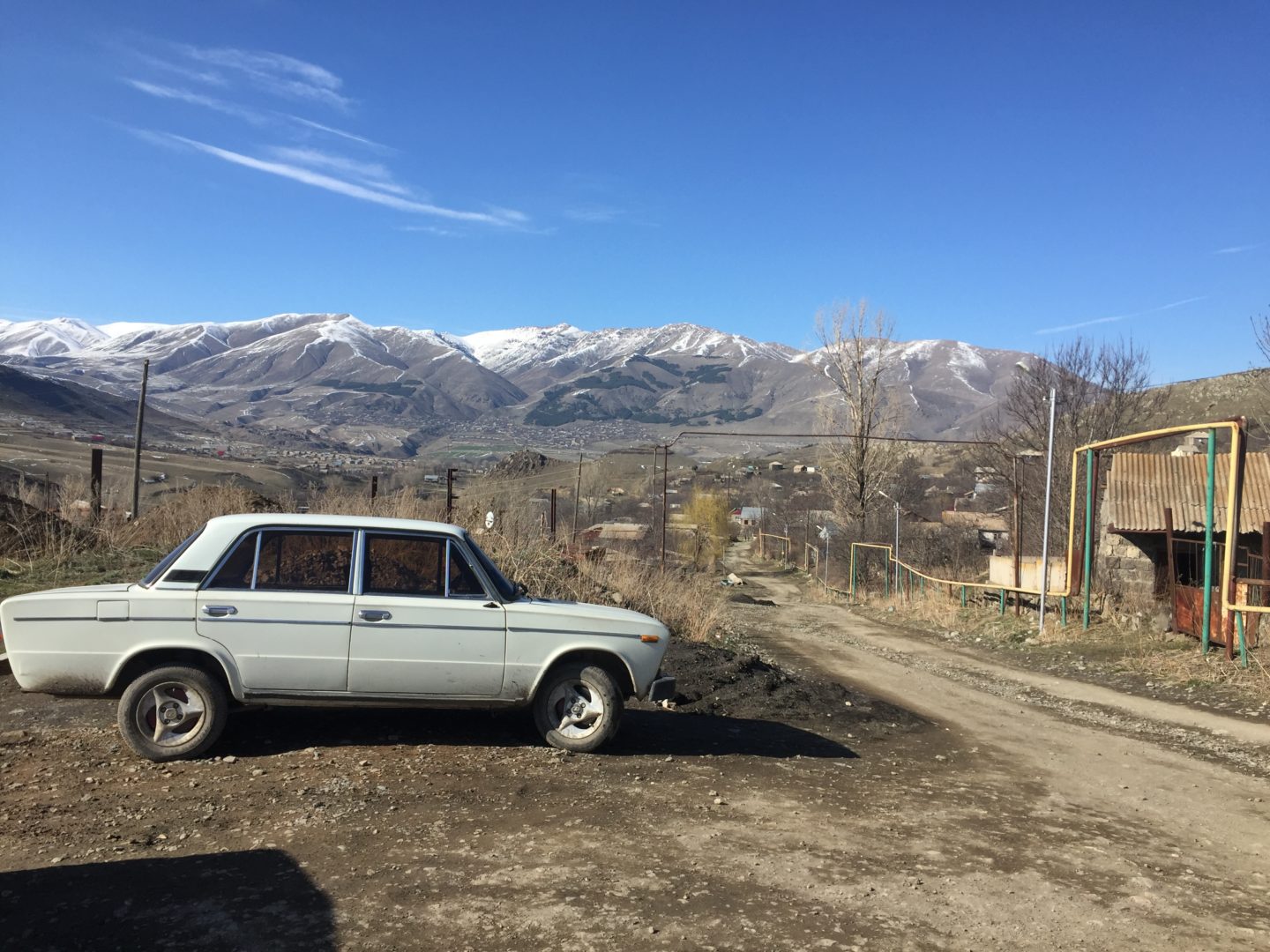 The village of Lernapat, in the Lori Mountains of Armenia. (Image courtesy of CAST).

LERNAPAT, Armenia — The air is piercingly crisp at 5,000 feet in the village of Lernapat, here in the mountainous Lori Province of Armenia. Kids wearing dark leather jackets gather around a pile of dirty stones outside the local store housed in a rusting shipping container. They chat away, passing around an Android handset.

The catch? There’s no data connection. Local telecommunications companies Vivacell, Ucom and Beeline claim to provide coverage but it’s especially patchy in rural areas like Lernapat. Armenia’s fiber optic connection runs through neighboring Georgia and ultimately connects to Russia, whose government subjects traffic to intermittent censorship. And at 3,000 AMD ($6.25 USD) per month, data plans are too expensive for many in a country with a 17% unemployment rate and a minimum wage of 55,000 AMD ($114 USD) monthly.

“It is not very advanced and there is not a lot of technology here,” Erik, a young Lernapat resident says. “We have wifi and modems at home but a village-wide network could make everything better.”

Lernapat is one of three villages — the other two being Kamaris and Lchashen — that researchers from the University of Central Lancashire selected for a trial of a village connectivity system using proximity technology. The project was called CAST (DisCovery Amplification Sustainability and InTeractions), and it involves installing broadcasting devices in local municipal buildings, schools and gathering places. The goal of the project is to see how decentralized technology and mesh networks can relay information and media to remote communities.

CAST uses WiCastr SMART Edge Platform, a UK-based content distribution platform, and was designed with villages, camps, festivals or other off-grid communities in mind. A WiCastr device is about the size of a wifi router, but instead of connecting to the internet, these devices create hyperlocal networks.

Unlike the global networks that serve internet content from around the world, the nodes of a hyperlocal network speak to each other within a much more a geographically constrained area. Hyperlocal networks can operate independently of the broader internet, sharing data and content that is relevant to the needs and interests of local communities.

According to a Google study, 40% of mobile searches are for local content and information, and that percentage is growing fast. More than 90% of mobile traffic worldwide is driven by Google. The supremacy of one company creates a dynamic in which local content is dependent upon the centralized authority of a distant corporation. By tethering content to a specific place, the CAST project aims to amplify information that is relevant to the local community, and filter out some of the noise of the internet.

The CAST network is low-latency, lightweight and self-contained. It uses RSS to pull in content from seven independent information providers. The system then converts this web content to static pages, which are hosted on local devices like phones and computers.

CAST researchers took special care to aggregate content from sources that differed from the usual sources of information for these communities, which is typically mainstream television.  and made an effort to select media outlets that emphasize quality news with a civic focus. These sources included online news network Civilnet, political satire group Arm Comedy and Hetq, a newspaper that publishes investigative reporting from Yerevan, the Armenian capital.

Over the course of six months, the CAST network has served nearly 5,000 articles 500 videos and 12,000 images totalling 22 GB of data across the three villages in which it operated. The CAST program ended in December 2016.

The supremacy of Google creates a dynamic in which local content is dependent upon the centralized authority of a distant corporation.”

Thanks to the CAST infrastructure, residents of Lernapat, Kamaris, and Lchasen received free access to alternative news and media, including both popular programs and content from local bloggers. Although the content that the CAST system served was limited to the seven outlets chosen by researchers, CAST built a WordPress blog to provide the community with a way to to write and share their own stories.

In fact, resident-produced media proved to be the most popular of all the content served by the CAST system, accounting for over half of total activity.

CAST showed that hyperlocal mesh networks are a viable technology to meet many of the needs of rural communities where internet access is scarce, expensive, or otherwise restricted.

Sara Anjargolian, the CEO of Impact Hub Yerevan, a partner organization that drove community engagement on the ground says, “If we can get to a place where we are bringing connectivity to villages who wouldn’t otherwise, that is a pretty cool result.”

Clare Elizabeth Cook is a senior lecturer in Print and Online Journalism at University of Central Lancashire, and co-founder of the Media Innovation Studio. Follow her on Twitter @cecook.