Over the past year, our team at goTenna developed a new zero-control-packet approach to mobile mesh networking. The results of the study — which we recently announced at the IEEE SECON conference — showed how this novel approach significantly outperformed current well-known protocols. In this article, we describe the motivation behind our research, and informally discuss several common questions: what does zero-control-packet mesh networking mean? For that matter, what is a control packet, and why is it needed? And why not simply use the many existing cellular/Wi-Fi/IoT standards?

Professionals in disaster relief, public safety and military contexts often need an instantly and inexpensively deployable off-grid communications system for collaborative mapping, texting, and emergency beaconing. For example, wildland firefighters seeking to contain spot fires can benefit greatly from an up-to-date knowledge of each others’ locations, the location and contour of a fire, and a shared view of dangerous areas.

An off-grid network of devices carried by the professionals is a natural solution to the problem. But what exactly are the requirements of the devices and the network? Clearly, the devices should be lightweight, long-lasting, and preferably not expensive. The network should be decentralized (for robustness and easy deployability), support mobility of professionals and finally, cover as large an area as possible.

Let us examine this last point a bit more. To maximize coverage, we need devices with long range, as well as the ability to multi-hop or mesh network these devices. By itself, mesh networking is only a partial solution; as this article shows, a mesh network of devices with short range (e.g. Wi-Fi) will either leave the network disconnected, or require astronomically large number of devices, and accordingly, cost too much.

The table below assesses several well-known standards on some of these criteria. As is clear from the table, there is no “off-the-shelf” technology that can satisfy these requirements. This includes the much-anticipated 5G — not only is 5G centralized, it also operates at the millimeter-wave band, which leads to very poor range properties. By one account, 5G has less than 2% of the range of 4G. This is clearly not a fit with disaster relief and public safety! 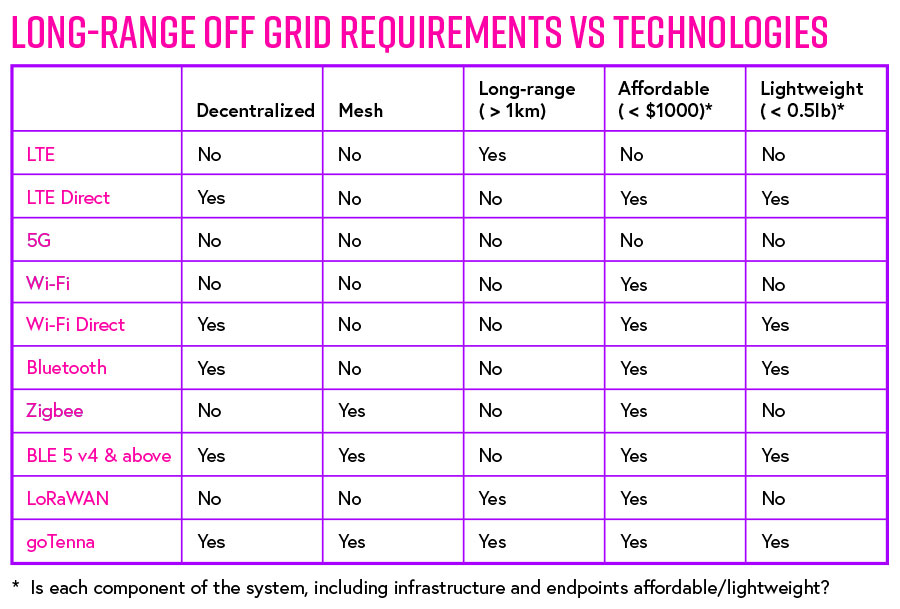 So what’s the catch? Building a lightweight (and hence low power), inexpensive and long-range device is possible, but comes at a necessary tradeoff — bitrate. I say that this is necessary because there are fundamental constraints that make it extremely difficult if not impossible to optimize all four simultaneously. As discussed further in this article, optimization of these inter-locked parameters is like playing whack-a-mole. You design to optimize some, and others stick out. To put it simply, the justifiable emphasis on connectivity, along with the need to minimize SWaP (Size, Weight and Power) and cost leads to a device with low bitrates. As a case in point, LoRA — one of the long-range IoT standards that is getting a lot of traction nowadays — has bitrates between 0.5 kbps – 50 kbps.

While such a low bitrate isn’t a problem for carrying the short-burst data we mentioned at the top of the article, it does turn out to be a problem for mesh networking. Specifically, as this paper shows, a well-known mesh networking standard called AODV scales poorly at 25 kbps. A key reason for this unscalability — and a reason that pervades most, if not all mesh networking protocols existing today — is the use of control packets. The overhead of control packets is tolerable in high-bitrate networks, but in low-bitrate networks eats up a large chunk of the available capacity leaving little or none for actual traffic.

What exactly are control packets, and why are they used? One way to think of them is as “scouts” — packets which figure out the connectivity of the network so as to compute the path that an actual data packet should take. A loose analogy is a Roman Empire commander sending out “speculatores” in uncharted territory to understand the lay of the land before deciding where to march the army. Different mesh networking protocols use different strategies for control packet generation and dissemination, as described in this article, and some may do the job with fewer control packets. But it turns out that the very act of using control packets consumes a base level of overhead.

goTenna’s Aspen Grove™ suite of protocols break through this barrier by using a novel zero-control-packet approach, that is, building routes without using any control packets whatsoever. Aspen Grove™ includes a network-wide zero-control-packet broadcasting protocol called ECHO for collaborative mapping and emergency beaconing; and a zero-control-packet unicasting protocol called VINE for private texting and other user-to-user communications. The key idea behind both protocols is to use the header information in data packets itself to build routing state that is then used to route future data packets.

ECHO uses this basic idea to build a mobility-adaptive backbone of critical nodes (see video below). Only critical nodes — often a small fraction of total nodes — relay broadcast packets, allowing more nodes to be supported and less battery energy to be consumed. VINE uses this basic idea to build “next hop” routing state to the originator of data packets (in our Roman Empire analogy, this is sort of like interrogating real travelers or allied scouts who travel through unknown territory to piece together a map based on their information). We have implemented and comprehensively simulated these protocols and showed that the performance is vastly superior to existing protocols at low bitrates, and in fact has an edge even at high bitrates.

To sum up, mesh networking of affordable, lightweight, long-range devices needs to surmount the challenge of low bitrate — a challenge existing protocols fail to meet. Aspen Grove™ is a game-changing breakthrough that succeeds in doing so, and offers the following benefits:

Aspen Grove™ not only revolutionizes the disaster relief and public safety scenarios for which it was designed, but it can also revolutionize communications in Internet-of-Things contexts, especially in long-range low-rate IoT applications and standards such as LoRaWAN. We envision Aspen Grove™ to evolve into a portable module that can be integrated into any wireless networking stack as a best-in-class mesh networking solution for diverse technologies.