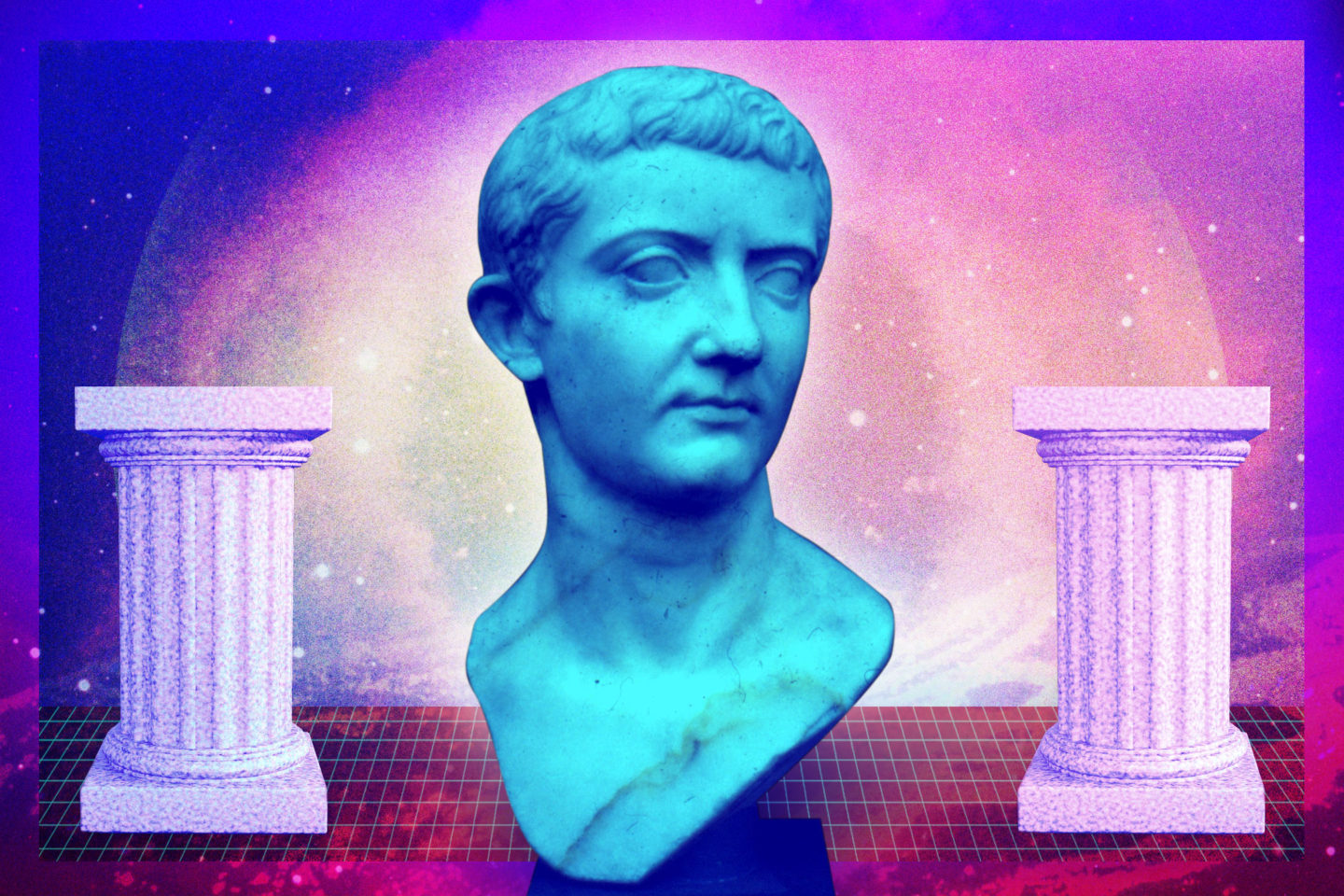 Maecenas, a new “decentralized art gallery,” is proud of its namesake – the ancient Roman patron of the arts, Gaius Maecenas. Best known as the benefactor of poets Horace and Virgil, Maecenas’ name is considered by many to be synonymous with ancient arts patronage. His stable of artists and writers, (colloquially referred to as “the circle of Maecenas”) played a formative role in the cultivation of Roman values and identity. With such an illustrious legacy, who wouldn’t be inspired to bear the Maecenas name?

The modern-day Maecenas definitely shares one trait with its namesake: an acquisitive taste for Nice Things. With offices in London, Geneva, and Singapore, the fledgling art-tech company aims to make fine art investment more accessible and democratic via blockchain technology. Their approach is to break down each artwork into digital tranches that can be bought and sold with a cryptocurrency of the buyer’s choice. (Maecenas also has plans to unveil their own in-house cryptocurrency, “ART.”)

This means aspiring art collectors can directly buy or sell part of an artwork without going through art brokers or other middlemen. With its rapid-fire investment platform and its private art storage system, the Maecenas model applies the quick and dirty dynamics of the stock exchange to the art trade.

It’s exciting on paper, but when viewed within the larger context of best art investment practices, art preservation, and cultural ethics, this approach raises serious questions.

ART AS AN INVESTMENT CLASS

Maecenas’ claim that fine art is one of the safest investment portfolios is deeply problematic. Although it’s becoming more and more common to see fintech-driven arguments that art should be considered an asset class on its own, many experts agree that art has long been a high-risk investment.

At the end of the day, there is no guaranteed formula to predict when (or even if) a creator’s work is going to substantially increase in value.”

Some in the industry argue that one should invest in art not because of the potential financial rewards, but because one likes art. Tom Cugliani, an established art advisor and owner of a highly successful gallery in New York in the ‘80s, is one such art-world insider.

“Fine art is not a commodity like other commodities that are exchanged,” he says. “It’s an item that has a widely inconsistent value. You can have two Picassos, both painted in the same year, the same size, maybe even the same subject matter, but with two different values. How do you explain that to someone as an investment? It’s irregular.”

Erin Wolfe, former gallery supervisor at DAC Gallery in Los Angeles, agrees, citing how quickly market trends can change. “If you plan on selling the artwork at auctions in the future, you’re immediately at risk the minute you buy it and take it home.”

“It could go either way,” explains JL (not their real name), a former gallery coordinator who has worked in London, Singapore, and most recently, the Bay Area. “If you’re trying to buy a Jeff Koons, his retail prices are more stable. I’ve worked with young artists whose works have doubled in retail price over two years simply because of demand, so where you start is already up in the air.”

Cugliani also warns that when dealers and auction houses are removed from the equation the risk of forgery and other problems increases. He notes the 2013 case where a skilled forger produced $80 million worth of Rothkos and Pollocks in a garage in Queens.

At the end of the day, there is no guaranteed formula to predict when (or even if) a creator’s work is going to substantially increase in value. Opening up art investment to anyone with bitcoin does decentralize art ownership, but it also invites the worst of the internet to play in a world that already suffers from theft and forgery. And when it comes to cryptocurrencies, things can get bad, and worse.

A RESPONSIBILITY TO CULTURE

These are responsibilities that affect every civilization around the globe: the charge to protect one’s own culture against exploitation, to preserve one’s art and its place in the broad universe of human experience, and a collective duty to ensure that we can access and understand our rich artistic history. If there is something to be precious about, be precious about art. It’s one of the most redeeming features of our species.

Fine art ownership isn’t simply a statement of wealth – to own art is also to make a commitment to education, as each artwork is a visual record of the time and place that produced. As Cugliani puts it, “If you want to live on Park Avenue, you have to pay a very high maintenance!”

Maecenas aspires to have the likes of Picasso and Giacometti in its first collection of flagship works — names that come freighted with the very real weight of their historical and cultural significance. But the company seems unconcerned with the responsibilities associated with fine art, especially with blue-chip works that deserve to be kept in the public sphere.

The Maecenas model radically underestimates the degree to which most art collectors actually like having their art around them. It would be cool to own a small piece of a Rembrandt, but it would be a lot cooler if it didn’t mean restricting access to said Rembrandt. The idea of owning 0.5% of a great work sitting in a vault somewhere is baffling to genuine fine arts aficionados.

One of Maecenas’ selling points is that it would give we the people a chance to own a small slice of famous works. But the art itself sits in one of Maecenas’ private storage vaults (“purpose-built art storage facilities” as they call them), only accessible by investors and their pals. On their website Maecenas explains “If there is enough demand for it, we may implement an art leasing facility where art lovers can temporarily hold the piece of art for a fee, and then distribute the proceeds as income to the art shareholders.”

“Why not give their work to a museum, with proper professionals?” JL asks. Cugliani is also quick to point out that this is an elitist as any approach and doesn’t exactly align with Maecenas’ democratic rhetoric.

Nonetheless, there is no fixed moral or ethical obligation for art owners to share their collections with the public. Kristine Tan, exhibitions officer at the ArtScience Museum, believes that people who buy art have the right to do what they want with it. “I would like to hope that most collectors would want to share their passion and love of art with the public,” she says, “but you cannot dictate what they do.”

Tan emphasizes that putting art on public exhibition is an important issue for accessibility and education. “Museums and galleries are the only way many people can access works of a certain caliber.”

For a long time, the fine art business has cultivated an air of exclusivity and an association with old-world wealth. This ethos is in stark contrast to the values of a new generation of art-lovers, who care more about accountability, open discourse, and institutional transparency. Maecenas wants to use blockchain technology to bridge this gap, but by focusing on art as a valuable financial asset they overlook what makes it an invaluable part of what it is to be human. We cannot afford to risk the future of human heritage for what presently looks like a disproportionately small payoff.

This is not to say that new technologies have no place in the world of art and art collecting. Blockchain in particular has plenty of room to grow in the creative world, and there are many people who have already begun to realize that potential.

Digital artists are using blockchain to track editions of their work across the web, as well as to run digital art platforms like Cointemporary. Art-tech companies like Verisart and Ascribe are tackling the eternal problems of attribution, provenance and ownership – far more sensible applications of blockchain technology that serve to directly benefit creators. Verisart has partnered with non-profits such as DACS (Design and Artists Copyright Society), artistic platforms like VAST and Avant Arte. Ascribe works with the folks behind the Berlin Art Prize, LOOP Barcelona, and Independent Collectors, whose goal is to make private art collections available online.

It would be cool to own a small piece of a Rembrandt, but it would be a lot cooler if it didn’t mean restricting access to said Rembrandt.”

Maecenas’ cause is a noble one: to make the acquisition process as democratic as possible. But in their quest to decentralize the art market, they overlook something that their ancient Roman namesake understood well. For all his opulence and excess, Gaius Maecenas had a deep appreciation for the significance of art in culture. In what was perhaps his most public-minded gesture, he posthumously donated his property — including the luxurious “Gardens of Maecenas” — to Caesar Augustus.

The gallery bearing Maecenas’ name has a clever model for making art ownership accessible to more people. But ironically, this same model removes art itself from cultural circulation, making less available to the people who value it for reasons that transcend the monetary.

The company still needs much work to shape itself into a trusted protector of a very rare, irreplaceable resource. When it does, then its platform can truly aspire to revolutionize the concept of art ownership.

At the time of publication, Maecenas has not responded to requests for comment.