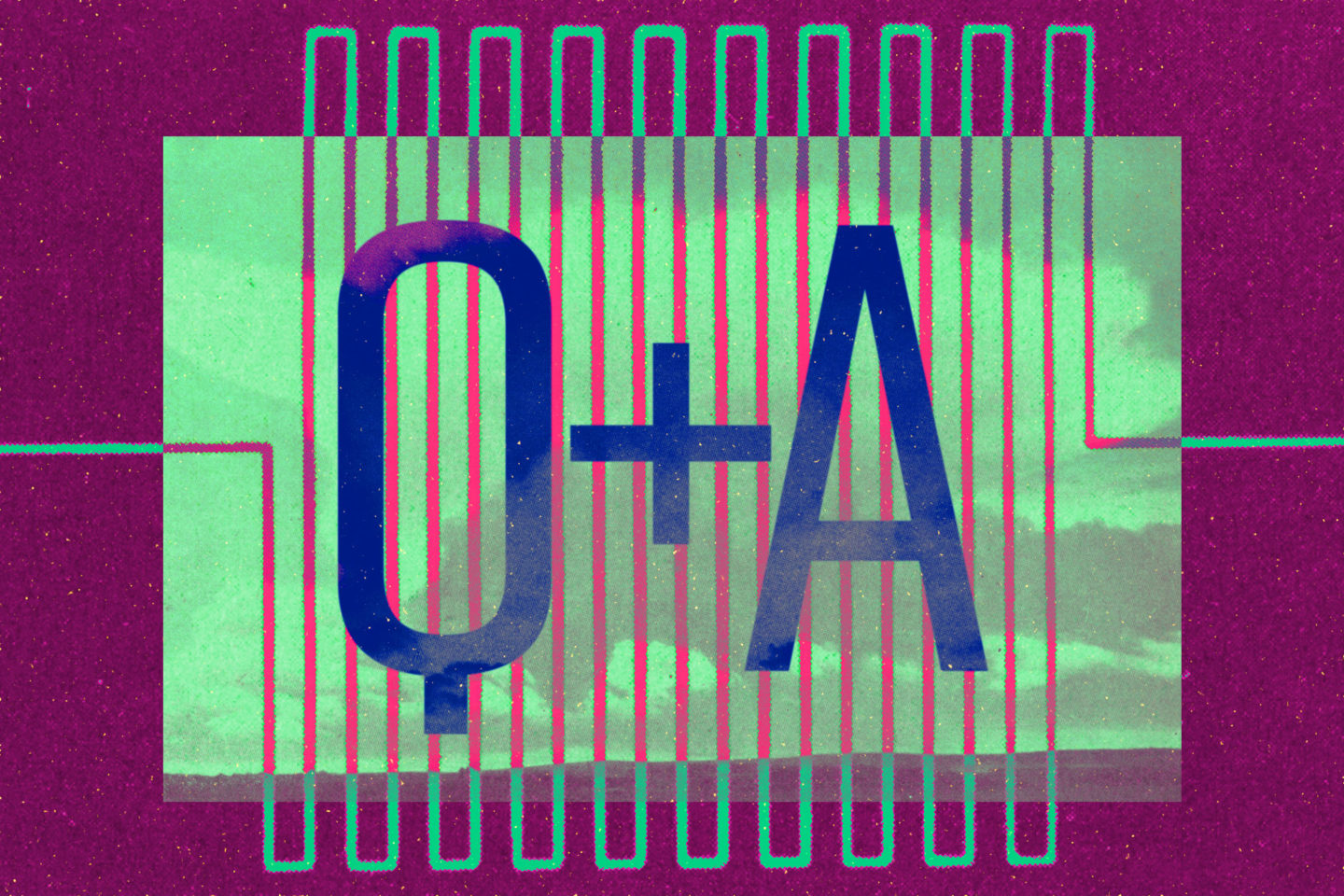 Wassim Alsindi, director of Parallel Industries, is currently co-writing a series of articles here on In The Mesh in which he’s deep-diving into bitcoin and the potential for crypto to be leveraged to assist those living under authoritarian rule. If you’ve missed them, be sure to check out parts I and II and come back soon for the last two installments. Wassim’s take on everything crypto is incisive, studied, and worth listening to, and he has an interesting background, ranging from academe to experimental music. So we chatted with him to learn more about his background and get his perspective on some current trends in the cryptosphere.

When did you first hear about cryptocurrencies and what were your thoughts about it at that time?
My life before Bitcoin and cryptocurrencies was as an experimental musician and decentralised arts organisation founder, manager of interesting creative technology projects and festival curator. Whilst on a music tour around the US West Coast in 2012 we went to a friend-of-a-friend’s place in Silicon Valley, he opened his closet and said “check this out, I’m doing this thing called mining Bitcoin”. It took a while to be convinced, the idea sounded great but everything I could find online looked quite dubious – Mt. Gox, Bitcoinica, BitInstant and so on – and as I wasn’t a computer scientist or cryptographer the detailed discussions were beyond me. It wasn’t until 2014/5 during what may have been Bitcoin’s darkest days that I started to get really interested. The idea of natively digital money that isn’t controlled by anyone has obvious appeal, but surviving the Gox incident showed me that the technology had some serious resilience and could be a long-lived proposition.

Lately, Bitcoin and other coins have been losing financial value. How do you see this turn of events and the claims that Bitcoin/crypto is and always was a “bubble”?
Well, the facts don’t lie, Bitcoin had a cycle bottom in 2015 at around $180 and two years later it was trading at a hundred times that price. As much as I favour Bitcoin’s characteristics and qualities as the first natively digital commodity and (in time) money, we do have to ask ourselves if that kind of price action is really sustainable or desirable. Volatility is acceptable in a commodity or speculative vehicle, but if people around the world are going to adopt it for monetary use we need to see some more price stability, increased liquidity and less friction in the conversion of our existing state monies to cryptocurrency. Was it a bubble? Probably. But not the first, and likely not the last either. So, are they bubbles or market cycles as a new asset is adopted, matures technically and becomes monetised? That is in the eye of the beholder.

Your interest in cryptocurrency seems to peak at times of others’ fear/panic. Why is that?

It’s somewhat of a cliché these days but I’ve been a technology researcher my whole adult life, so I really am here for the tech and the freedom. My interest has been steadily building over the years and having wrapped up previous commitments I have nothing better to do now. I don’t take pleasure in the bear market, it’s been very difficult for me and for Parallel Industries too. We’re operating on a shoestring, and the string keeps getting shorter every time the market takes a leg down. I had hoped to bootstrap the organisation on an open-source donations model but this seems very difficult at the moment – even organisations and developers who directly contribute to these protocols are struggling. All the same, every day that Bitcoin survives in the wild it gets stronger and more widely known. These days you don’t have to ask most people in the developed world if they’ve heard of it, they just want explanations and/or advice.

You’ve innovated a field of fork future studies, called forkonomy. How do you hope it will impact the crypto space?

The research area arose from a conversation with a Twitter friend who was monitoring hashrate on various networks using the Equihash algorithm. We noticed that a new coin (BTCP) had a much higher “market capitalisation” but a fraction of the hashrate of the project it had been borne from (ZCL). Due to the novel “fork-merge” operation used to generate the new ledger, a coin with an effective age greater that Bitcoin’s was created. 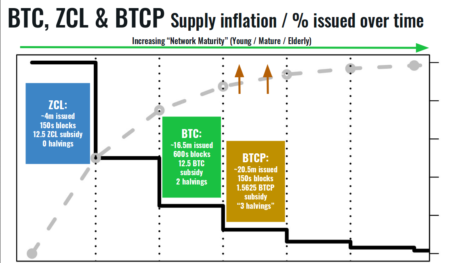 So we have been afforded a glimpse into a possible future of Bitcoin, albeit a nightmare scenario where the network has not achieved its goal of developing a transaction fee market before the mining subsidy attenuates. The goal is to find similar anomalies as they arise and relate them to the possible futures of major networks. Having spent some time as an experimental astrophysicist, I like to compare this idea with the stellar taxonomy of the Hertzsprung-Russell diagram which predicts the likely fates of stars based on their temperature and luminosity. 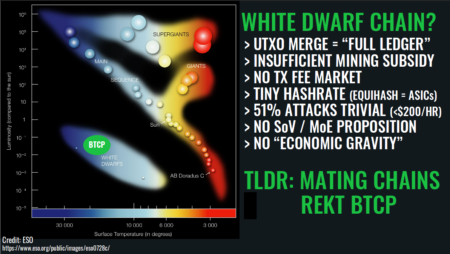 Still some way to go before we have a suite of robust and predictive analytical tools, we are very much in the alchemical phase of cryptocurrency.

How has your background has made you sensitive to the potential uses of cryptocurrencies by people living under oppressive regimes?
Without going into too much detail, the “political and humanitarian hacking” potential of decentralised technologies in general and Bitcoin in particular are very real for Iraqi diaspora such as myself. For those who were able to leave the country under Saddam’s rule as some of my family did, one of the hardest things was to move money or value from place to place. Bank accounts had been frozen, confiscations of gold and cash were commonplace at airports, bandits would patrol the desert regions close to frontiers looking for easy pickings and scholars’ international funding was withdrawn suddenly. Given the above, it is not hard to see promise in these nascent technologies to re-empower the individual and community at the expense of tyrants, institutions and nation-states. The fact that we can engineer tools, solutions and strategies for people living under oppression or conflict to have government-hard, unconfiscatable pseudo-monetary assets completely changes things for people in the most unfortunate and compromised situations.

What kinds of uses of crypto do you envision that can do the most for people in those situations?
I would say that only a handful of cryptocurrencies truly show the resilience (today or as future potential) to withstand these sorts of situations. These are the ones with sufficiently mature and dispersed networks that have a defined focus on immutability, privacy and censorship-resistance that also lack central points of failure such as conspicuous leaders, companies or foundations. Bitcoin, Monero and Ethereum Classic are the examples I have identified having deeply studied the cryptocurrency space for the past six and a half years. (Happy to hear of any more – please hit me up on Twitter, even if it is a smaller / newer network.) The uses are limited only by the ingenuity of the brilliant minds worldwide who do and will work on these issues, and that is what Reaching Everyone is really about – nothing more complicated than a non-profit, unorganised initiative to plant these seeds in curious minds: that we must not forget the rest of the planet as the fortunate ones create a new world of financial freedom. But we don’t have to get too hand-wringing about it – this is not about “Western guilt”. Incentives drive Bitcoin and everyone can act according to their own rational self-interests here. Furthermore, the less resources people have at hand, the more resourceful they tend to be. Anyone who has visited less wealthy countries can attest to this.

How did Reaching Everyone come to be?
The idea came about quite unexpectedly, despite all the above. Exactly a year ago (December 2017) I was in London for a meeting with British Financial regulators as I have another project TokenSpace which has developed novel taxonomic frameworks to help see similarities and differences between cryptographic assets which aims to help prevent regulatory mis-steps. It just so happened that my much beloved Danish-Faroese friend and infamous radical experimental musician Goodiepal was performing with his band their annual Christmas show that evening. So I went along and found out that they had moved to Serbia and were raising funds for informal humanitarian work with refugees stuck in limbo there at the EU frontier. Among the biggest issues facing the people they had been helping were moving money internationally and exploitation / extortion by smugglers and mafia cartels. I simply put two and two together that cryptocurrency can provide at least a partial solution to these problems. I’m sorry that we haven’t been able to raise any money for the immediate cause but I hope we can still make a difference in the longer-term.

Your interests are wide-ranging and Parallel Industries seems to have a holistic view on the crypto world. What do you hope Parallel Industries will add most significantly in the near future to the crypto scene?
Indeed things are moving forwards quickly on multiple fronts, and as well as pushing ahead as much as possible with Reaching Everyone, I am trying to take a wider view of what I consider the ontological meta-stack as applied to radically decentralised technologies. The “TokenSpace” supra-taxonomy research project is very close to outputting a manuscript after over a year of work and I recently revisited “Forkonomy” in early 2019 having learned some new skills at the command line for node operation, mining and directly harvesting blockchain data. There is another project entitled “DAOs and Don’ts” which investigates insider asymmetries in P2P networks, though it is a daunting prospect to comprehend the task at hand due to the sheer volume of cases encountered.